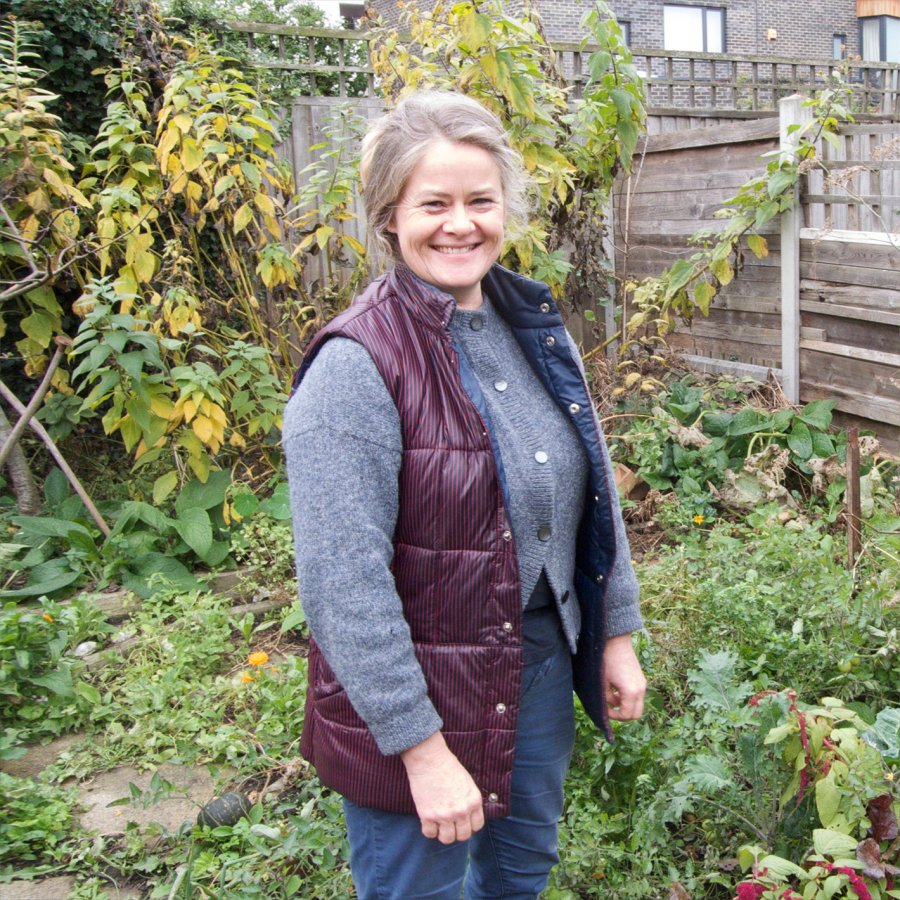 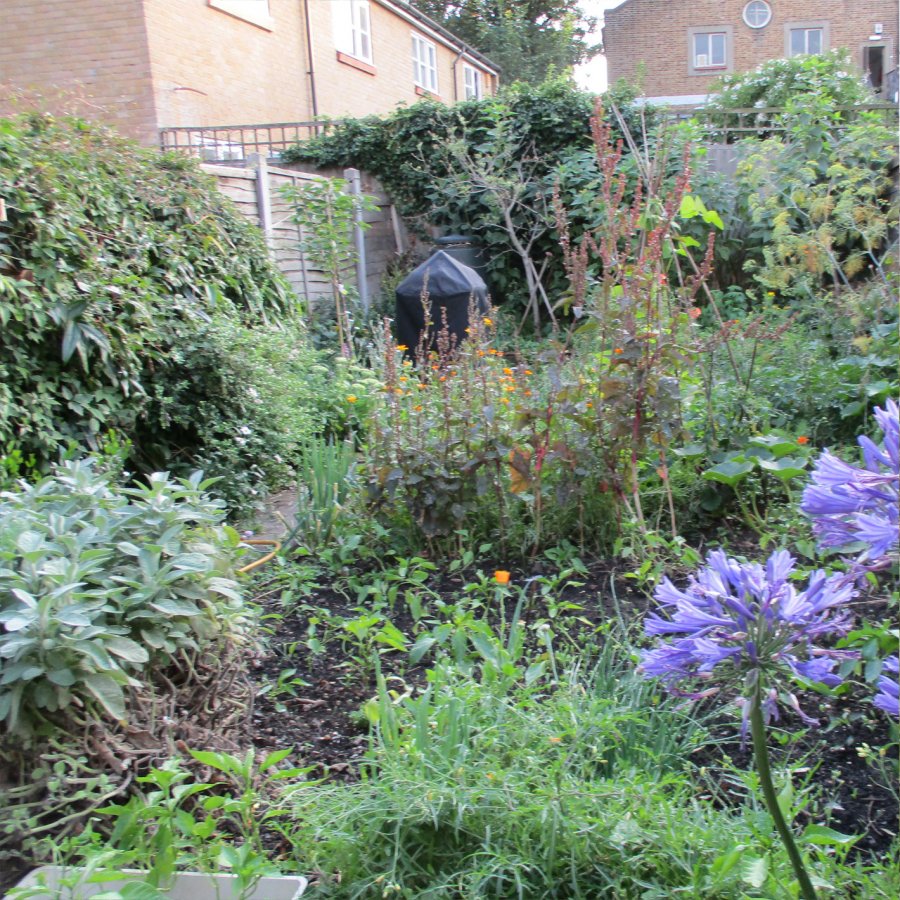 I’ve been growing food and gardening for flowers for as long as I can remember. I keep the seeds and I keep plants living their whole life for the animal biodiversity so there’s insects coming in and the birds eat the seeds. So there’s enough there for everyone. I’m very keen about growing vegetables, their nutritional value, and just the fact that you can walk out your kitchen door and pick your dinner. Particularly in a world that’s got far too many pesticides and chemicals in it. So I value that. And also just the benefit to one’s health. I do it for my mental health more than anything else. London’s quite stressful, I couldn’t really be here without a garden. 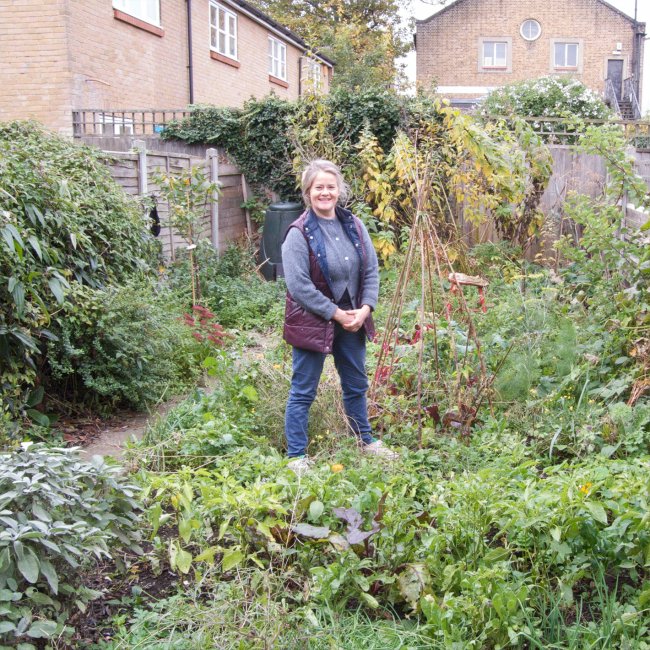 I’ve been growing food and gardening for flowers for as long as I can remember. I keep the seeds and I keep plants living their whole life for the animal biodiversity so there’s insects coming in and the birds eat the seeds. So there’s enough there for everyone.

Why I grow my own food
I’m very keen about growing vegetables, their nutritional value, and just the fact that you can walk out your kitchen door and pick your dinner. Particularly in a world that’s got far too many pesticides and chemicals in it. So I value that. And also just the benefit to one’s health. I do it for my mental health more than anything else. London’s quite stressful, I couldn’t really be here without a garden.

Why I save seeds
I save seeds because of cost, and providence. Seeds that grow in your own location become stronger about growing in that space. Buying in seeds might have come from, say 150 miles away, and that’s a different kind of climate. So growing several generations of your own seed in its location means that’s strong and viable seed. The portfolio of my seed box keeps growing. The seed box is really, really key. Ok I might move to a different area and they’re not actually from that area, but then you start again. The seed box is really important. And it’s cheap, well it’s free. The cost of seed is quite extraordinary actually. Six pumpkins seeds, you know, a couple of quid. And then it gives you something to share with your friends and encourage other people to grow. People come for dinner, share your food and you say “I grew this in the garden”. They are like, “Wow this is amazing!” I’m like, “Got some seed if you want to take some with you”. Send them in with a Christmas card maybe. So yeah, trying to spread the excitement to people who don’t have experience of gardening to get them involved. Because it is so simple.

Connection between growing and my heritage
I was raised on a farm. We grew all our own food in the vegetable patch and then we had animals and crops. So I’ve always been in that relationship, it’s in-built in me, it’s not something I’ve consciously gone out and learnt. Well I have a bit, I’ve gone and studied horticulture and have expanded what I know by working for other people. But in essence yeah it’s in me to grow things.

My mum, always, every year bought new seeds. I always thought it was a bit bonkers frankly but that’s what she’d do. It was an interesting time. Modern agriculture came in and slightly devastated all traditional farming methods. So the concept of saving seed went out the window.

Whereas I save seeds and I do my best not to buy seeds and in fact I do my best not to spend anything on the garden, the garden has to pay for itself. Twenty quid a year I probably spend on my garden. And I’ve gone back to more organic production and traditional farming and gardening methods, which is the kind of the difference between me and my parents’ generation. In the 70’s and on they were like “Get out the old, don’t need it any more.” And now I’m putting it all back.

How I feel when Im working in the garden
Oh it’s a total de-stress. It’s meditative and it has a kind of compulsiveness, but that’s not a bad thing you know. Also, because you’re concentrating on something that’s a menial task, weeding, you can zone out. It’s a meditative thing. I wouldn’t be able to sit in a room and meditate. It’s having a task that’s quite simple that becomes a routine, or it becomes a natural thing to do for half an hour a day. If I’m working I’ll come back and garden for half an hour before I can relax. That is my relaxing time. 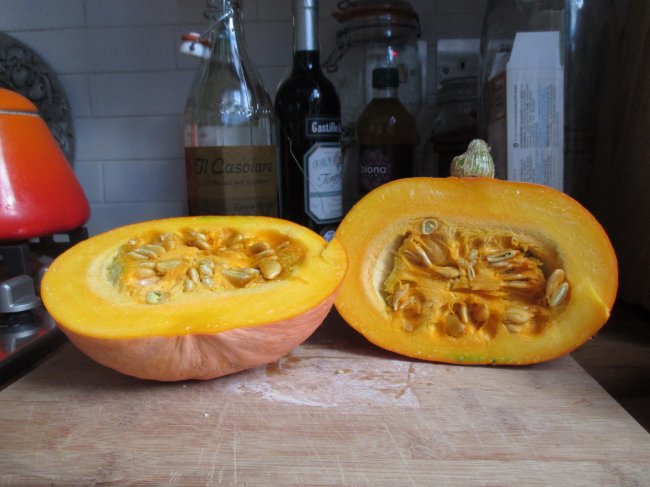 Pumpkins and squash, also known as cucurbits, were first cultivated in the Americans and are now grown around the world for their edible fruit and seed. The fruits are good sources of vitamin A and...
More

Where the seeds came from
This is a large variety of winter squash, with delicious yellow flesh. I started growing it about four years ago. I bought the seeds originally from Tamar Organics. I started out with a pack of six because when you buy squash seeds you don’t get many. Since then I’ve been keeping my seeds and getting more and more and more, and been sharing them with friends.

Why I grew it
I wanted a vegetable that could sit through the winter, that you’re like, “Shoot we’ve got to eat tonnes of this at the moment.” These can keep, as long as you keep them in the cool, for months. This one’s four and a half kilos. We’re still eating the soup that I made on Monday, so it’s given us many meals of that.

How to grow
I make my own paper pots, fill them with compost and put a seed in, a couple of inches deep. Add water. Squash seeds like heat to propagate, so you need to keep them indoors around twenty degrees. Anything less than that they don’t really like it. I make my own propagator out of a clear plastic box, upside down so the base is the lid… More 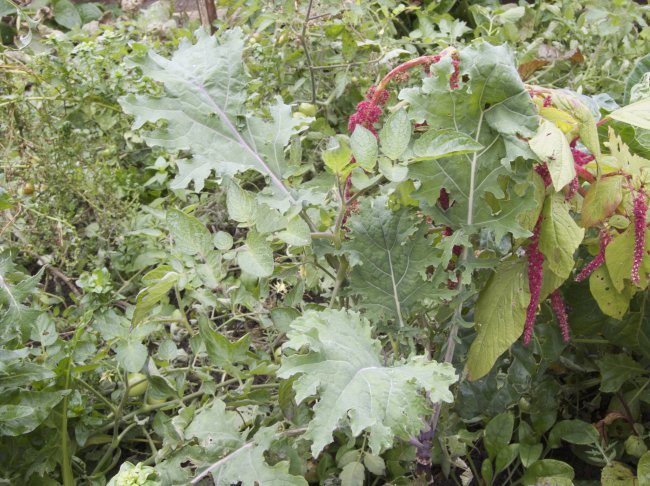 Kale is a group of vegetable cultivars within the plant species Brassica oleracea. Until the end of the Middle Ages, kale was one of the most common green vegetables in Europe. Curly-leaved varieties of cabbage...
More

Why I grow it
I grow it because it’s robust and it goes through the winter. It’s a hardy British arable crop. We grow it to feed cattle. It’s a new superfood for humans, but it really is quite an easy thing to grow. It’s not like other cabbage plants where you’re trying to get hearts and cabbages and you’ve got issues of white butterflies and caterpillars eating your crop. It’s the joy of cutting and coming again. You just keep hacking it back and it just keeps growing. I’m really keen on crops like that, particularly in a small space, so you’ve constantly got fresh greens without having to worry.

Where the seeds came from
I was working in an organic garden last year and there were a couple of seedlings that were going in the bin that I rescued. I quite like rescuing plants. So I was eating the kale last year, left some to go to seed, which have now come to seed this year, ready to grow again next year.

How to grow
I probably sowed them late April into a simple seed tray with compost. They don’t need to be propagated indoors, they’re quite a tough hardy plant. So just defending them from the slugs and snails, who love seedlings of any sort. Once they’re decent sized plants, three to four inches high, transfer them into the garden in rows… More